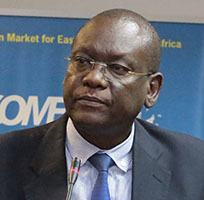 Ambassador Dr Kipyego Cheluget was appointed COMESA Assistant Secretary General (Programmes) by the Summit of Heads of State and Government held in Kampala, Uganda in November 2012. Dr Cheluget, formerly Kenya’s High Commissioner to Zambia and Malawi and Permanent Representative to COMESA, joined the Secretariat in February 2013.
He is a long serving diplomat, and is formerly the Deputy High Commissioner of Kenya to New Delhi, India.

This appointment is a record of sorts for him noting that this is his third stint in Regional Economic Communities. He served at IGAD as Chief, Conflict Prevention, Management and Resolution officer in the late 90s before joining the East African Community as Deputy Secretary-General for Projects and Programmes from 2001-2007. He also served in various capacities at Kenya’s Ministry of Foreign Affairs, including as Director, Foreign Service Institute, Asia and Australasia, Middle East, Research and as Deputy Chief of Protocol.

Dr Kipyego’s academic background includes a doctorate in Political Science from Northern Arizona University, and BSc and MSc degrees from Illinois State University, all in the USA. He has also previously taught at Kenyatta, Moi and USIU universities in Kenya.

The new Assistant Secretary-General is motivated by his desire to see greater regional integration, following the shameful partition of Africa more than a century ago. He believes COMESA has the best chance to achieve this objective for Africa, especially when the COMESA-EAC-SADC tripartite arrangements come to fruition.

He is married to Ruth and is blessed with adult children.